By Donald Richmond on May 29, 2014 in Miscellaneous 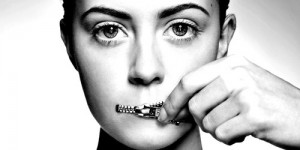 The Rule of Saint Benedict asserts that, for the love of silence, we should at times refrain from speaking. But this is not simply monastic wisdom. The Bible itself, in St. James 1, tells us that we should be “slow to speak.” This admonition is simultaneously connected with God’s own creative word (“the word of truth,” in our text) and the absolute necessity for us to hear it (“quick to hear,” in our text). That is, in other words, we must be “slow to speak” because God’s creative word must be clearly heard before we dare to communicate anything.

Asceticism of speech is an important spiritual discipline. Wisdom suggests that we learn to live by this ascetic practice. How very odd, therefore, that God’s insistence upon silence is often met by a preponderance of words.

God exists from eternity and to eternity. For untold and untellable millennia God was, from a strictly human perspective, silent. God, as far as we know, “said” nothing. At a point in time God spoke “Let there be,” and from this point of time the “good” and “very good” speech of God entered into history. Henri Nouwen has properly suggested that this good speech was rooted in and structured upon silence. God’s speech was predicated upon God’s silence. (See: The Way of the Heart)

God, by Divine prerogative, determined to provide us with verbal (Speech), written (Scripture) and visual (Savior) revelation. That which God spoke, was written and ultimately revealed in and through Jesus Christ (Hebrews 1: 1 – 2). Without the Bible (and to some degree, Holy Tradition) we would have no ability to know or understand the verbal and visual communication of God. Without God’s written revelation, we would be entirely impoverished.

Let us take a moment to reflect upon God’s written revelation. We have been given the Bible, the Canon of Scripture, by God. It is a joy to be able to take, “mark, learn and inwardly digest” what God wants to say to us. This is to be celebrated! But have we ever taken the time to think about what God has NOT said? Think about it. God, who inhabits eternity and exhibits all of the character qualities appropriate to unique Divinity, has not verbally said very much.

This is a lesson for us, a lesson that we have not entirely learned.

When we consider God, the “All-in-All,” He has remained “silent as light.” And yet we have an entire “Science” devoted to His study. The Queen of Sciences, Theology, is therefore intended to be a Theology of reserved speech. The multiplication of “mouths” has only resulted in theological Babel.

When we consider Scripture, God’s Written Revelation by, of and for Himself, He has not really spoken a great deal. And yet, how many commentaries and homilies have been composed and communicated about the Bible? Millions! This becomes most painfully illustrated through some Christian educators who have, quite literally, spent years teaching one book of the Bible. I know of pastors who have actually spent between seven and ten years teaching exclusively, barring holidays, from one book of the Bible. Seven to ten YEARS!! This is really nothing to celebrate. While I do not doubt the intention of these educators, the verbal path they have chosen may communicate far more about them than it does about the true and temperate written word God seeks to speak. Scripture communicates reserved speech, and so should we.

When we consider the Gospels, centering chiefly upon our Lord’s three-and-a-half year ministry, we will be surprised to know that only about three months of our Lord’s life is actually discussed. Yes, we do have references to our Lord’s incarnation, youth and ascension, but such references are brief. Primary attention is given to his adult ministry which is also exceptionally sparse in specifics and time: Three months out of a three-and-a-half year revelation of Christ and his life and ministry. In short, once again, very little is actually said. Silence is largely the “voice” God has chosen to use.

This reservation in revelation, this slow speech of God, is important. God has a great deal to speak to us through the punctuated silence he has “written” into our world and His revelation. But, instead of silence, we cultivate sound. Often the soundings of our searching have resulted in separation from God and neighbor.  Our sound has created a barrier that often limits the proper intimacy that only silence can attain.

The early desert Mothers and Fathers were frequently asked for a “word” from their Abbas or Ammas (spiritual Fathers and Mothers). When they spoke this “word,” the disciple would seek to apply it for days, weeks, months and years at a time. I have myself repeatedly stopped my reading of 1 Corinthians 13, the “Love Chapter,” when I reached the statement “Love is patient.” Why read more when I have not entirely applied this?! This orientation is seen in one of the stories of the desert Fathers. Three young disciples approached their Abba for a “word.” The Abba graciously gave them a “word,” a spiritual life-principle, to work on. Every week, for the next year, two of the three disciples returned to their spiritual master for another “word.” But the third disciple did not return until a year had passed. After a year, he returned to his Abba and requested another “word.” Surprised by the disciple’s year-long absence, the Abba asked why the disciple took so long to return. The disciple’s answer was telling: “It took me a year to apply the ‘word’ you gave me, so why should I return to hear more words if I had not entirely applied the first?”

Thomas Merton was right. We are “glutton[s] for words.” We want to hear and speak them — more the latter than the former. Let us learn the lesson of silence. Let us be slow to speak.