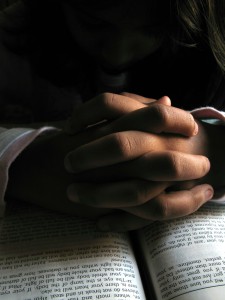 We are all familiar with the warning, “be careful what you pray for.” Although this caution is often offered with considerable tongue-in-cheek, it is also wise to carefully reflect upon its admonition. Prayer is, indeed, dangerous.

Often, as when James and John lobbied our Lord for priority of place, we are not entirely sure what we are requesting. We may have a breadth of understanding, but we lack considerable depth. While this may apply to a multitude of both fixed and free prayers, this breadth without depth becomes most obvious in the prayer that Jesus taught his disciples. More often than not we recite this prayer– even when said from the heart– with little attention given to the dangerous priorities we are setting. We understand its broad petitionary skeleton, often utilizing it as a pattern and a process for prayer, without comprehending the essential marrow of its existential expectations.

Many of us were taught the Lord’s Prayer as children. Over the years we have recited this prayer, often daily and weekly at church, with an abandon that can only be rooted in innocence. Whether said in the morning, mid-day, or evening, the Lord’s Prayer has provided comfort for countless souls.

And the Lord’s Prayer does provide very comforting words– although not always comfortable words. In fact, at times, the prayer that Jesus taught his disciples is disturbingly disruptive. When prayed properly it is, shockingly, quite radical. Let’s examine this prayer according to the priorities established within the text.

From the very beginning, this prayer is unusually off setting. Our Father…in heaven sets a standard that, from our limited human perspective, is contradictory. God is the perfection of fatherhood, expressing love, warmth, and intimacy. On the other hand, because of God’s stated heavenly geography, He is somewhat removed from us. There are, as such, terminological and theological tensions which must be navigated by the petitioner.

These words must not, however, be interpreted as distance or detachment. God is both interested in, and involved with, the details of our lives. God cares. Nevertheless, these things said, God IS God and we are not. He may indeed be Father, but He is also “in heaven.” He may be absolute Love, but he is also absolute Lord. There is an inherent difference, distance, between God and humanity that neither words nor worship can entirely bridge.

This principle becomes all-the-more apparent when the second standard of the prayer is established: HALLOWED BE THY NAME. All prayer, at least for the Christian, must operate within this established priority. The purpose of prayer, although much more could be said, is the hallowing of God. The priority of GOD is the purpose of prayer. The priority of GOD is the purpose of humanity. Although prayer does include petition, as the prayer goes on to indicate, it essentially establishes the priority of the Kingdom. If our prayers do not correspond with kingdom priorities they must not be prayed. To begin all prayer with the hallowing of God requires a radical shift of our personal priorities. To have any other priority is to render hallow as hollow.

Thy kingdom come and Thy will be done ON EARTH AS IN HEAVEN further prioritizes the hallowing of God’s name. Prayer is kingdom language used for kingdom purposes. It is the voice of God in the mouth of Man. As such, when we do not properly vocalize and interiorize this petition, we set a “kingdom against itself” priority. An example of this, limited though it may be, is in order. One of the primary points of conflict between Roman Catholics and Protestants was Bible and Worship in the common tongue. Catholic resistance to this, as seen in their adamant insistence upon Latin, was interpreted as Theo-political power mongering. Although on some level this interpretation can be defended, it is also accurate to suggest that Catholic insistence upon Latin was aimed at attaining and maintaining a united Church in which a common language was used. As such, utilizing Latin insured that all God’s people would all be on the same theological “page.” The Latin language established and ensured (in Catholic thought) catholic priorities, principles, and practices because, by using Latin, communication and kingdom worked hand-in-glove. This illustration, although limited, suggests that to take these words upon our lips, to say THY KINGDOM COME / THY WILL BE DONE, is to establish within our own lives a “God FIRST” and “Kingdom FIRST” priority. Prayer and practice become one within this petition. (To discuss language and Orthodoxy is also important, but well beyond the scope of this broad and brief consideration.)

This brings us to the painful point of our own limited petitions. Having established the priorities I have noted above, we now come to our own concerns:

These four petitions briefly illustrate God’s concern for us. God is interested in our sustenance in its manifold expressions, both temporal and eternal. When Jesus taught his disciples to communicate their needs, it must be understood that God intended to fulfill these needs. Our Lord was not teasing them, or us, with false promises or false hope. But how can we make sense of these petitions when Jesus:

Went without daily bread Became sin for us Was maliciously tempted (“yet without sin”) and was not delivered from the horrors of crucifixion or the awful experience of spiritual abandonment?

How do we make sense of our own socio-psycho-pneumatic unmet needs?

It would be easy to “spiritualize” the answer to this question. It might be said, as an example (and not without a measure of accuracy), that the “daily bread” we receive may not always be physical bread. Rather, instead, it refers to our spiritual sustenance. But, of course, this too might be called into serious question. If memory serves, according to Come Be My Light: The Private Writings of the ‘Saint of Calcutta,’ Mother Teresa went for almost fifty years without a word from God. She did not, if I recall, have any sense of God for almost all of these years. Broadly, and rather bluntly, there did not seem to be much “daily bread” for this woman — and for, I am sure, many others. I am intimately acquainted with one person, a true saint, who has also been embraced by the sense of a horrible absence of God for years. (I am NOT suggesting, however, that Savior, Scripture, Sacraments, and Saints do not provide real relief under such circumstances.)

I could provide an exhaustive and extremely comfortable explanation of these spiritual incongruities. Explanations are to be had; explanations that do not leave us naked against a howling chill of wind. I could provide a very systematic theology whose very gray matters are all properly resolved. But this does not, I think, address the stark prayer that nakedly addresses our own priorities.

Hebrews 11: 39 -40 provides us with a clue of an answer: ALL THESE DID NOT “RECEIVE WHAT WAS PROMISED” (NASB). These are very stark words that are in keeping with the priorities set in the Lord’s Prayer. That is, in other words, when we establish God’s hallowing, Name, and Kingdom as our absolute priorities it means that we are suspending our own need for sustenance in all of its expressions.

Frankly, this frightens me. While I DO understand the reasoning behind the naked statement made in Hebrews 11 and in the Lord’s Prayer, for the same reasoning applies to both, it does not provide me very much comfort. The reason for both is so that God could provide “something better” (NASB) for others. That is, the cross is for us and the Lord’s Prayer (by setting a God-centered priority) is for others. Both shift us into an other-centered (Other-Centered) focus. Kingdom and cross are one because (I believe the Latin says) “The Lord reigns from a tree.”

An Abbey on My Mind…
Calling Students to The Call