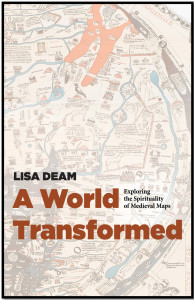 AFFN member and author Dr. Lisa Deam is offering an exclusive to Contributing Members of the Network: A book excerpt series from her latest publication, A World Transformed: Exploring the Spirituality of Medieval Maps (Cascade Books, 2015).

The Bible contains several images of a motherly God. In the Old Testament, God is described as a comforting mother (Isa 66:13) and a she-bear with cubs (Hos 13:8). In the New Testament, Jesus speaks of himself as a mother hen longing to gather her chicks to her side (Luke 13:34 and Matt 23:37). Peter even likens Christ to a nursing mother in a verse that recalls Aelred of Rievaulx’s description (quoted in last week’s article) of Jesus’ lactating breasts: “Like newborn babies, crave pure spiritual milk, so that by it you may grow up in your salvation, now that you have tasted that the Lord is good” (1 Pet 2:2–3).

More surprising are the New Testament passages that describe not only a motherly God, but also a birthing God. The epistle of James says, “Every good and perfect gift is from above, coming down from the Father of the heavenly lights, who does not change like shifting shadows. He chose to give us birth through the word of truth, that we might be a kind of firstfruits of all he created” (Jas 1:17–18).

Even though James calls God our Father, for the term translated as “give us birth,” he uses a Greek verb—apokueo—that, according to Sophie Laws, “more properly denotes the female’s part in giving birth.”[1] Laws notes that the same verb appears in verse 15, in which sin begets death. She believes that the repeated verb in verse 18 is meant to heighten the contrast between sin’s offspring, which is death, and God’s offspring, which is life. These differing images of birth are indeed striking. Equally arresting is the fact that James assigns to God a physical birthing. God is both father and mother to every person who is born again.

More remarkable still, we find in the New Testament a verse describing the childbearing experience of Jesus Christ. It is a veritable birth story. The story is told in the book of Acts, following the descent of the Holy Spirit. On this occasion, so important for the early church, Peter preached about the supremacy of Christ, proclaiming, “God raised him up, having loosed the birth pangs of death, because it was not possible for him to be held by it” (Acts 2:24). I quote this verse from a translation by Lutheran pastor Margaret Hammer, who asserts that the term “pain” or “agony” used in most Bibles today is more accurately rendered “birth pangs.” Hammer writes, “The birthing imagery—unmistakable in the Greek original—is lost in most translations.”[2]

Jesus’ birth pangs took me by surprise (as birth pangs are wont to do). When I think of birth in connection with Jesus, I usually turn, like most Christians, to the familiar nativity passages in the Gospel of Luke, the ones that relate the coming of an infant savior. Peter’s metaphor changes the game. Jesus was born of a mother yet, as Peter proclaims, became a birthing mother himself.

This metaphor, in turn, brings us to a new understanding of the crucifixion. The essential meaning of this momentous event does not change. Instead, its import is heightened. Through his choice of terms, Peter likens Jesus’ agony and death to the birthing pains that presage new life. Acting as a midwife, God delivered Jesus—loosed the pangs—so that the womb opened and the world could be born anew. We often speak of Jesus’ “work” on the cross. Peter’s sermon helps us see that it was more than work; the cross was truly a “life-giving labor of love,” in Hammer’s expression.[3] 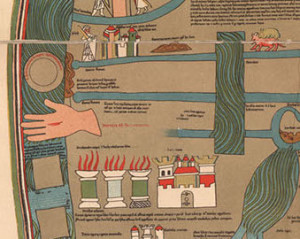 Labor and crucifixion come together on the Ebstorf Map. On this map, Jesus’ hands and feet bear wounds from the cross. Jesus also stands in a cruciform position, his arms spread wide. The pregnant Jesus is the suffering Jesus. Together with Peter’s sermon, the map gives Jesus’ motherhood a precise definition: mothering means birthing. And birthing means salvation. It means grace, forgiveness, and eternal life.

The tradition of Jesus as mother is thus key for understanding our salvation. Motherhood does not just allude to Jesus’ kindness and compassion. It is not a vague term describing the way that he acted. It has theological meaning that we cannot ignore. Thanks to our savior’s maternal instincts, each of us receives new life. We are born into the freedom that is our birthright—literally, our birthright—in Christ.

In part 3 of this series, we’ll see what the tradition of Jesus as mother means for our everyday faith.

Lisa Deam has a Ph.D. in medieval art history from the University of Chicago and is the author of A World Transformed: Exploring the Spirituality of Medieval Maps (Cascade Books).
View all posts by Lisa Deam →

Ancient-Future in Portland
The Filioque Debate