By Donald Richmond on July 9, 2014 in Uncategorized

“Blessed is the person who knows his own weakness, because awareness of this becomes for him the foundation and beginning of all that is good and beautiful.” -St. Isaac of Syria 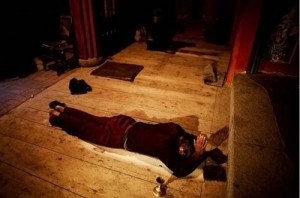 Monasteries host a number of unusual people and practices. I know because I have been a part of a monastic order or community for over a quarter of a century. Being “unusual” is not necessarily bad. In fact it might even be asserted that in a fallen world, where brokenness is to be expected, the unusual and abnormal might be (from God’s perspective) a sign of sanity.

Just the other day at the monastery with which I am affiliated, as an example, I saw a woman “creeping” to the Altar on her knees. From the back of the church, until she had almost reached the Priest-Monk at the transept, she scraped her way up to receive Holy Communion. Her black-lace veil only accentuated her penitential posture.

We Protestants have almost always found such demonstrations suspect. In fact, within the Reformed English Christian tradition, such practices were openly mocked. “Creeping” to receive the Eucharist suggested religion gone wrong. “Creeping” suggested that we were seeking to make atonement for our own sins, instead of boldly receiving the gift of God provided to us through the substitutionary death and justifying resurrection of Jesus Christ. Such a penitential posture suggested that we must “earn” grace, not be humble recipients of grace.

But this perspective may not be entirely accurate. In fact, penance is an essential part of repentance. Consider an illustration. I steal ten dollars from you. After spending this money, I am convicted by God. I feel sorrow and remorse. I want to be right with God again. Consequently I repent and commit myself never to steal again. Does God accept my remorse and repentance? Of course He does! God is good and gracious. Nevertheless, while God freely forgives me, you are still missing the ten dollars I stole from you. My sin continues to impact your pocketbook. My sin, even if you do not know I stole the money, has separated me from you. This must be repaired. Scripture is quite clear about this. Penance, the active and social aspect of repentance, must take place. I must engage in the penance of reparation if my repentance is to be full and complete. (I must add, however, that HOW one makes reparation requires wisdom and caution.)

Evangelicals make much, as we should, of “keeping short accounts with God.” Most of us, every day I hope, examine our consciences and confess our sins and shortcomings. And this we must continue to do! However, what we often lack is the reparative element of repentance. Being right with God must result in, when and where possible, reconciliation with our neighbor. Remember Zacchaeus!

When I was a child, at a certain part of the Eucharist (a practice that, among Roman Catholics, has now been reinstated), I used to strike my hand upon my heart three times, repeating “by my fault, by my fault, by MY MOST GREVIOUS fault.” On some occasions, during both my private devotions and public worship, I continue this practice. This is very useful, I believe, to impress upon myself the truth of my absolute depravity.

Again when I was in my late teens, soon after I became a Christian, I was convicted by God about the things that I had stolen. As part of my repentance I needed to return what I had stolen. I can assure you that asking forgiveness of others, especially when I had stolen from them and needed to make reparation, was not easy. And yet, by God’s grace (and the graciousness of others) I did so. (“Creeping” to the “Altar” of human reconciliation is, indeed, frightening!) The first example illustrates a physical expression of heart-repentance toward GOD. The second example illustrates a physical expression of penance toward my NEIGHBOR.

Penance does not need to be relegated to the oft-used and oft-illustrated statement of, after confessing our sins to a pastor / priest, “Say ten ‘Our Fathers’ and ten ‘Hail Marys.’” In fact even Roman Catholics recognize the limitations of such a strict interpretation of penance. Penance seeks to make things right. It is a righting of wrong in the human forum —- which, at times, intersects with the Divine forum. Maybe we should become far more pronounced, physical and practical in our expressions of repentance. Maybe “creeping” to the “Altar” of our neighbor’s mercy, a little practical repentance (=penance), is needed.

(As well, it must be noted, that penance may also involve expressing EXCLUSIVLY TO GOD an outward form of inward transformation.)