By Donald Richmond on December 13, 2013 in Miscellaneous 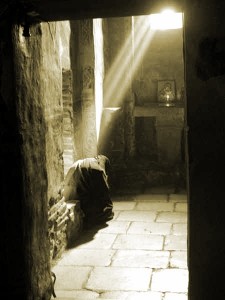 Every Christian is called to holy living. This is not a personal option, it is an inspired expectation. The Holy Spirit desires a holy people. The Paraclete requires perfection, Christian perfection. As those who are made alive by the Holy Spirit, with Jacques Maritain we can therefore assert that the “only one sadness [is] not to be a saint.”

Those of us who have read The Seven Storey Mountain may recall Thomas Merton’s fruitful exchange with Robert Lax soon after Merton’s conversion. During this conversation, Lax flatly insisted that the call of the Christian was to be a saint. In shock, Merton asked how this calling was to be achieved. Lax’s answer was short and simple: “By wanting to.” According to Merton, Lax went on to say that “All that is necessary to be a saint is to want to be one. Don’t you believe that God will make you what he created you to be, if you will consent to let Him do it? All you have to do is desire it.”

Of course, as we are all aware, this is far easier to say than it is to do. Between the intention and the reality falls T. S. Eliot’s pernicious “shadow.” And, with Eliot, we may indeed have “wept and fasted” and “wept and prayed,” and repeatedly found that we all too often fall short of God’s ideal and our intention. The wanting is not always the achieving. We need to be disciplined and discipled in practical holiness. Although we all Christians may be inclined toward holiness, we are all in need of “how to” instruction. In short, we need “a word.”

The Rule of Benedict (RB) is precisely the word that we need. It provides God’s children with an outline of obedience that leads to practical holiness. It does this by issuing a call, providing a context and establishing a college. These, rooted as they are within the considerations of living in and as a community, help every committed Christian achieve her or his intended purpose.

THE CALL OF OBEDIENCE

Echoing Solomon’s Proverbs, Saint Benedict heralds his Rule with the oft-quoted word LISTEN. “Listen carefully,” he writes (RB, Prologue, Saint Benedict Press, 2007). The wisdom of God is found in carefully listening to God. God’s words are our wisdom and our way.

Careful listening, according to the RB, has at least three very practical applications. Those who want to be holy must “turn” (RB, Prologue). We must, according to Saint Benedict and Holy Scripture, “turn the ear of our heart.” As such, Benedict calls us to a change of heart. We are called to radical interiority. According to him, change comes from the inside-out, and not from the outside-in. However, we cannot change our heart. We cannot, on our own initiative, “turn.” We must recognize, as did the old Shaker hymn, that turning is a gift. The ability to turn is, in fact, a gift of God. And the very good news is that this interior change is prompted and empowered by a relationship with God. As one of my teachers repeatedly said, “God’s command is God’s enabling.” We are God’s children and, as such, we can change. In this context, therefore, obedience is inwardly generated and not outwardly imposed. It is not an “I must” but an “I want” and an “I will.” This is a great gift.

Second, those who want to be holy must also “accept” (RB, Prologue). Saint Benedict urges us to “[w]illingly accept” the “advice” that is offered. Turning opens the mind and accepting inclines the heart. Turning is “seeing” and accepting is “believing.” But why should we accept this teaching? Why should we believe enough to obey? The reason is simple: This calling is issued by God (with whom Christians have a relationship), through Scripture (through which God and God’s covenant are revealed), by Benedict (by whom we are issued a Rule to which we are committed) out of complete and unconditional love. Acceptance is therefore the penetration of the life of God into the soul of human persons. We turn to embrace and be embraced. Acceptance is the “Yes” of our Lady. Acceptance knows that it is God “here now, speaking to you” (RB, Prologue). Such knowing moves from the “head” to the “heart” into the “hands.”

As well, those who want to be holy must “practice” (RB, Prologue). Hearing + Heeding = Holy. The practice of this advice is “labor.” It is, properly understood and applied, war (RB, Prologue). To be holy is to “fight for our true King, the Lord Christ.” Turning opens the mind. Accepting enlivens the heart. Practice engages the hands. “Blessed be the Lord my God / Who trains my hands for war and my fingers to fight.” As such, the practice of obedience is established upon the priority, principles, practice and power of prayer. The rule of prayer is the rule of both belief and behavior. Listening, accepting and practicing are prayer-as-perfection-in-community priorities.

THE CONTEXT OF OBEDIENCE

The RB is issued to “children,” the daughters and sons of God and Benedict. It is issued to the community, the enclosure, as family. This emphasis sets the tone for the entire text, and is highlighted in Chapter One of the RB. The RB is issued to “Cenobites, or Conventuals, who are the most steadfast class of Monks.” To this I would also add Oblates and all those who seek to live holy lives within the context of a vital and vibrant Christian community. (It must be noted, however, that the time-and-community-tested “Hermit” also has a share in the calling to and context of holiness. The hermit’s relationship to the whole and the holy is the subject of other considerations.)

Community is the context of obedience.  It is the cathartic way and means by which we grow in practical holiness. How is this accomplished? It is accomplished through God’s grace and the practical expectation of Benedictine “stability” which enlightens and empowers prayer. It is accomplished, again by God’s grace, by stability within the (at times) unsatisfactory society of saints.

Our society, and often our churches, resists stability. Church-hopping and church-shopping are commonplace. If we do not like the pastor, we change churches. If we do not like a particular theological nuance, we leave. If the worship does not provide us with the “feeling” we are looking for, we jump ship. If the community is not “seeker sensitive” – with a coffee bar, bookstore and smoking lounge in the lobby – we feel deprived. If people are not “nice” or “too nice” or are “not our kind,” we resist or refuse relational commitments. We do not seek stability – the grist of change – we want stimulation. Stimulation, however pleasant, does not result in sanctification.

Saint Benedict, living as he did during a time of great and unremitting upheaval, clearly understood our wandering propensities, relational proclivities, cultural climate, and the difficulties we all face during times of challenge and crisis. This is precisely why he emphasized stability in community. For Benedict this was just not a social need (which it certainly was and is), but a spiritual imperative. If we are going to successfully resist being crafted according to cultural norms, we need a counter-cultural answer. This answer is found in the Rule of Saint Benedict. Benedict’s call and challenge to his children is a “here” and “now” imperative (RB, Prologue). He requires saintly stabilization for the process, purpose and power of sanctification. He tells us to “stay put” in order to “grow up.” His stabilizing “voice” is, especially in our society, radically counter-cultural. (And, thankfully over the past number years, more people from many different denominations and walks of life are embracing “intentional community”). Community is the catalyst of change. Relationship is the critical resource for revival.

THE COLLEGE OF OBEDIENCE

I am now an aging “hippie.” My adolescence was shaped by the priorities, principles and practices of the counter-cultural revolution of the late 1960’s and very early 1970’s. Unfortunately this radical reorientation occurred at a time when I did not enjoy the stability of church life. As such, and in very short order, I became indiscriminate and disoriented. Not only did I embrace the concepts of human and civil rights, of “liberty and justice for all,” of peacemaking, I also became involved in a number of destructive counter-cultural activities that compromised my socio-psycho-pneumatic health. Dereliction, depression and despair began to dominate my life. Two very unfortunate drug-experiences, along with a hearty “Lord, save me,” shifted the entire direction of my journey.

This journey largely began about a year after the “two very unfortunate drug experiences” referenced above. I went to college; but not just any college. The first college I attended was biblically faithful, grounded in community and functioned like a monastery.  Although it technically did not have an Abbot, Prior and monks, in almost every way this college was structured as if it did. Its substance and standards were monastic. Prayer and work were emphasized. Obedience was not just suggested, it was mandated. It truly was a “school of the Lord’s service” (RB, Prologue).

It is to be noted that Saint Benedict’s Rule begins with (RB, Prologue), and is immersed in (RB, Chapters 8 – 20), prayer. This foundation of prayer is for the purpose of perfection (cf. RB Prologue, “amending our ways” and RB 73, “loftier heights…of virtue”). This occurs within the college of an obedient and stable community. A VERY swift analysis of Benedict’s prayer-as-perfection oriented agenda insists upon a community for prayer (Prologue and Chapter 1), a captain overseeing the community of pray-ers (Chapter 2), a parenthetical council by which prayer and community are governed (Chapter 3), the characteristics or prerequisites of prayer-and-perfection-in-community (Chapters 4 – 7), the calling and crafting of prayer-as-perfection (Chapters 8 – 20) and, with a few exceptions, considerations for continuing as a community committed to prayer-as-perfection (Chapters 21 – 73). The “school” was and is the community, and the “service” was and is prayer. These, structured as they are in the RB, are the path of perfection.

I must conclude with the essential curriculum of Benedict’s college of obedience, and it will be properly assumed that the curriculum is prayer. And, of course, on some level, it is. Nevertheless, the RB provides two very pronounced particulars about prayer-in-community-as-perfection. These are found in Chapters 6 and 7 and can be crassly considered as emphasizing our need to “shut up” (Chapter 6) and “put up” (Chapter 7). Of course “Silence” is far deeper than keeping our mouths closed, and “Humility” includes far more than toleration. But, in spite of this, prayer-as-perfection-in-community (and through community) is enhanced through the cultivation of silence (“waiting on God”) and the disciplines of humility (“wanting for God”). Although we have a wide-array of tools from which to draw (RB, Chapter 4), the children of the Lord’s school are perpetually clothed in silence and humility as prerequisites.

One of the greatest needs of the church today is to experience and express practical holiness. Unfortunately, as our society no longer seems to hold at the center, as we become more fractured and distant, as we become ever-more removed from community life and living, holiness is not provided the practical “soil” in which to grow. Holiness (with the rare exception of the time-and-community-tested Hermit) requires community. If prayer is a means of perfection, it needs the stability of a community where prayer can be practically exercised (exorcised???) in life. The RB, its priorities, principles and practices, provides us with such an environment.

“Raise up, O Lord, in your Church, the Spirit which animated our Holy Father St. Benedict, so that, filled with same Spirit, we may strive to love what he loved and live what he taught. We ask this through Christ our Lord. Amen.”

2 Responses to Holiness: A Benedictine Approach