By Donald Richmond on July 22, 2014 in Miscellaneous 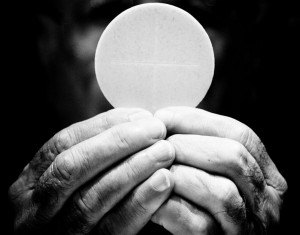 Here are a set of experiences I find, as should you, troubling:

I was refused communion, even though I was known, because I did not belong to their group.

I was refused communion, for the same reason, in an entirely different denomination.

I was held in suspicion, in third denomination, because I was far too flexible.

I was held in suspicion, in a forth denomination, because I was not flexible enough.

I was refused a pastoral posting that I had essentially clinched when I would not be Republican.

I was refused another pastoral posting because, I am sure, I did not say “Prayer Book” like them.

I was called demonic by one militant Christian because I challenged “non-essential” doctrine.

I was called a heretic in the exact opposite denomination when I expressed a bit of breadth.

Recently, by a pastoral friend, I was accused of being too Catholic. This is quite odd because some Catholics I know have told me I am too Protestant. In some churches I am seen as far too “Liberal.” In other settings I am seen as far too “Conservative.” In some churches I am “Conservative” enough, but do not say things EXACTLY as they say them. In other churches I am “Liberal” enough, but do not ENTIRELY hold to their party line. On and on it goes. Is anyone else troubled by these kinds of attitudes and actions? Does anyone else believe that such ideas essentially compromise Christ, the “good news,” and the cause of essential worship and effective evangelism?

What is most disturbing about each of these illustrations is that NONE OF THEM involved biblical essentials, barring, maybe one (which could be seen as an interpretational matter). In each of these illustrations I share a common book (Bible), common creeds (Two or Three), common prayer (Lord’s), common morals (Ten Commandments and Sermon on the Mount) and, to some degree, common Sacraments (Baptism and Eucharist being primary, with the other five being, possibly, of practical value). These, to me, are more than enough to build bridges and to share, far more fully, a common life.

And yet we don’t share a common life. And yet we DARE participate in Holy Communion while we insist upon the damnable doctrine of “I am of Paul, I am of Apollo” (1 Corinthians 3:4). I recently had a woman dare to insist, not unusually I might add, that SHE was of Peter…and thus Jesus Christ himself! Sadly, on my part, I told her (from Job): “Surely you are the one, and with you wisdom will die.” (I was wrong…and I apologized.)

But let’s think about this for a bit. Let’s examine what is going on. Christians are, together, the body of Christ on this earth. We are the salt and the light. We hold “the keys.” We are ambassadors of Christ’s good news. But what do we do? We anathematize each other, render judgment upon each other, refuse sacramental fellowship, unworthily participate in the Sacrament, and compromise effective proclamation. Shame! Disgrace! Heresy!

What shall we do? The Ecumenical Movement, for good and at times for ill, has been around for well over a hundred and fifteen years. Some progress, small progress, has been made; but not anywhere close to what is necessary. While a number of options are available to us, one of which is a mass and united rebellion against the denominational authorities who subvert the Word and work of God, I will propose a far more strident alternative. We need to assert, and radically apply, the strictures of Scriptures regarding Holy Eucharist. In short, apart from extreme circumstances, NO UNITY, NO COMMUNION! Let’s hear what St. Paul says on this matter.

All of us are familiar with St. Paul’s words in 1 Corinthians 11. In this chapter Paul clearly and concisely outlines the expectations for The Lord’s Supper. In verses 17 – 32, within the clearly stated context of “divisions,” there are a number of challenges Paul sets before the participants. These are: (1) Be cautious of betrayal, (2) Be aware that it is the Lord’s Supper before it is our Supper, (3) Be alert to our Lord’s command to “do this,” (4) Be discerning, (5) Be aware that this is a covenantal meal, the breaking of which has damning consequences, (6) be insistent upon waiting.

Betrayal is the context which Paul cites for the offering and receiving of communion. His illustration clearly references Judas and his kiss of betrayal. The implication, for the Christian community of Corinth, was simple: Their activities betrayed Christ and betrayed the Sacrament. The implications for us are the same, albeit now posed as a question: Do we feign kissing each other ecumenically but, in practice, betray each other by insisting upon our own way? We TALK about unity. We preach about unity. We pray about unity. But we also gather in our own denominational conclaves to cast anathemas upon each other.

Arrogant exclusion is behind this. One person insists on his way, another on her way. One party says that they are of Paul, while another says of Peter. The most rank are those who insist they are of Jesus. But beneath this, as Paul says, is the eating and drinking to the exclusion of others. How often do we partake while we exclude others– either immediately in our own assemblies, or in our broader denominational conclaves? Paul says “NO!” The Body and Blood are “given” for all the body– not for a part of it. It is our Lord’s Supper. He has issued the invitation to all Christians. To exclude is to eat and drink damnation.

Obedience is insisted upon. “DO THIS” is what Jesus said, and what St. Paul reiterated. But many churches tell others, not of their stripe, who do not pronounce “shibboleth” in the same manner, NOT TO DO THIS. You can come for a “blessing,” if very lucky, but you are told that you cannot do what Jesus says because you do not say it like the particular denomination insists upon. Some, really arrogant groups, insist that they are NOT exclusive but, rather, they are truly “catholic.” Other Christians are truly welcome– as long as other Christians are “catholic” just like they are “catholic.” In other words: Be us and you will be okay! Ut Unum Sint, indeed!

Discernment is called for. We must examine ourselves. We must be assured that we are seeking to build bridges between ourselves and other Christians. We must make sure that we do not come to the “Altar” unconfessed, unforgiven, and unreconciled. This has both local and universal applications. Are we reconciled as a BODY, not just as an “eye,” “ear,” “nose,” “mouth,” or “hand” of a local assembly? Do we invite the Christian– TRULY a Christian– to come and dine at the Lord’s Supper with us? Do we invite them to our pulpits? Do we ask for their input? Or, as I recently experienced, are our sound ideas roundly rejected (even when we cite proper and respected sources) simply because we do not look like or speak like them? Think of this in another context: You are starving. I offer you Bread and Wine for the journey. But, because I use gluten free bread and grape juice, you pass upon the gift and die. Or, again: You come to the Altar of God because you are spiritually hungry, but, because I do not know you, I refuse to feed you. Instead I give the blessing, “be warmed and well fed,” while refusing the covering and food of Christ to you. Makes sense doesn’t it!? ABOMINATION!

Covenant is at stake here, and covenant is not to be taken lightly. Eucharist is not just a ritual, it is a covenant. Supper is not just a rite, it is a covenant. Table is not just a sacrament, it is a covenant. GOD ESTABLISHED THE COVENANT, and NO human person or institution has a right to abrogate it! And yet, as I go from church to church, assembly to assembly, they disregard God’s own covenantal expectations. At this point I would be wise to outline the concept of covenant. However, wanting to assume the reader’s intelligence, I won’t. It should be sufficient to say that GOD takes covenant seriously, and those who do not do so will reap serious consequences.

Waiting may be what is needed; a moratorium on Eucharist asserted and maintained. St. Paul tells us that many people in the Corinthian church became sick because they participated unworthily. Have we ever thought that the sickly state of the Church is due to the unworthy manner in which we have participated in the Sacrament? Let’s not side step the issue! WE ARE NOT RECONCILED, WE DO NOT SEEK PRACTICAL UNITY, WE ASSERT A “PAUL/APPOLOS” ETHIC, WE INSIST THAT OUR WAY IS ALWAYS RIGHT, WE TRAIN OTHERS IN OUR DENOMINATIONAL SELF-RIGHTEOUSNESS, AND WE PARTAKE– UNWORTHILY! We must wait. We must weep. We must stop.

This brief article calls upon all Christian pastors– barring the extremities of First Communion, illness, or Last Rites (or the equivalent)–  to stop giving Communion. While such an orientation may take time to entirely implement, it is not entirely out of the question. In fact, strictly speaking, it might be biblical.