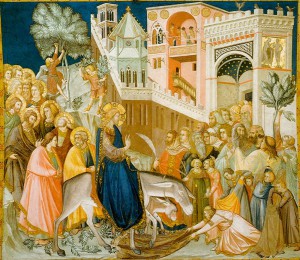 In this discussion we’ll follow the Passion account of the Gospel of Mark, bringing in other sources. The entrance of the King (Mark 11:1-25) would be part of the structure of the enactment or renewal of the covenant. Here Jesus comes as a King according to Zechariah 9:9-11. The Zechariah passage contains an explicit reference to the King’s dominion (9:10) and the “blood of the covenant” (9:11). The acclamation of the disciples (“Hosanna,” or “Save us!”) refers to the reappearance of Davidic rule in Israel.

In biblical covenant structure, the Great King proclaims his laws or stipulations of the treaty. Jesus proceeds to cleanse the Temple (Mark 11:15-17) and enunciates his terms: “My house shall be called a house of prayer for all the nations” (quoting Isaiah 56:7).

This follows, in Mark, the cursing of the fig tree (11:12-14). The fig tree is a biblical symbol for Israel, which comes under the curse because it has been unfaithful to the covenant (see Deuteronomy 28). This unfaithfulness is manifested in the way the Judaic religious establishment has subverted the intent of the covenant. As given originally to Abraham, the covenant was the Lord’s promise that “by you all the families of the earth shall bless themselves” (Genesis 12:3). But in the hands of the Pharisees the covenant has become a badge of Jewish exclusiveness, an impetus to an expectation of a Messianic revolt against Roman domination.

Hence there is a clear link between the cursing of the fig tree and the cleansing of the Temple, where Jesus declares the true intent of the Abrahamic covenant in opposition to the Pharisees’ revolution-fomenting distortion. In Luke 13:1-9, Jesus warns what will happen unless the people repent of this revolutionary mentality. Buildings will fall on them, the Roman sword will slay them — “unless you repent you will all likewise perish.” Those things happened, of course, when the Romans destroyed Jerusalem and the Temple in subduing the Jewish revolt of AD 66-70. In the interim, Jesus and his apostles had to reconstitute a faithful Israel that would survive those events of “great tribulation,” so that the Abrahamic covenant and the mission of God’s chosen people could go forward. That, of course, is the issue Paul is dealing with in Romans: Who is “justified,” i.e., recognized to be an authentic member of the Lord’s covenant people?

Reading further in Mark 11, Jesus and the disciples return to the cursed fig tree, now withered. Jesus uses the tree as an example of faith (or better, faithfulness). He declares, “Whoever says to this mountain, ‘Be taken up and cast into the sea’ . . . what he says will come to pass.” This mountain, of course, is Mount Zion, site of the Temple; “the sea” can be a prophetic reference to the Gentiles or “nations” (for example, Isaiah 24:13-16). Casting Zion into “the sea” means that, through the faithfulness of the disciples, God’s covenant with Israel will expand to include “every tribe and people and tongue and nation” (Revelation 13:7), even though the “fig tree” has been unfaithful to its true purpose.

The same theme of the ruptured covenant, to be renewed in a new people, appears consistently in the narrative of “Passion Week” that follows. The owner of the vineyard (another symbol for Israel, e.g. Isaiah 5:1-7) “will come and destroy the tenants, and give the vineyard to others” (Mark 12:9). Judgment will come upon the unfaithful religious establishment; “there will not be left here one stone upon another, that will not be thrown down” (Mark 13:2). These things will happen within the lifetime of those listening to Jesus (Mark 13:30). “Heaven and earth will pass away, but my words will not pass away” (Mark 13:31); in Scripture, “heaven and earth” are witnesses to the sanctions (blessings and curses) of the covenant (Deuteronomy 4:26, 30:19). Because the covenant has been abrogated, the present “heavens and earth” will be destroyed (2 Peter 3:7), to be replaced by a renewed “heavens and earth” (2 Peter 3:13). In this renewed covenant, “a new heaven and a new earth” (Revelation 21:1), there will no longer be a “sea” — that is, the distinction between Jews and Gentiles will no longer be relevant (Galatians 3:28).

What will endure, then, is not the present misapplied covenant with its Pharisaic traditions, but the “words” (enacted teachings or principles) of Christ. Through his death, as a “ransom” (Mark 10:45) the curse upon unfaithful Israel is to be applied so that the covenant, now freed from its curse, can be extended in its Abrahamic fullness to all nations (Galatians 3:10-14).

Perhaps Jesus alludes to the preservation of the “words” (which, of course, became the Gospels and the rest of the New Testament) in his remark about the woman who anoints him at Bethany (Mark 14:1-8). “Wherever the gospel is preached in the whole world, what she has done will be told in memory of her.” There will be an ongoing deposit of the “words” of the renewed covenant, so that the apostles are later commissioned to teach all nations “to observe all that I have commanded you” (Matthew 24:19-20).

Immediately follows the narrative of the Last Supper, where the covenantal implications of Jesus’ entry into Jerusalem come to a clear focus: “This is my blood of the covenant, which is poured out for many” (Mark 14:24). The background here is the narrative of the Sinai covenant, in which Moses reads the “book of the covenant” (the stipulations of the treaty between the Lord and Israel), receives the people’s pledge of loyalty, and then sprinkles the blood of the sacrifice upon the people (Exodus 24:6-8). Then Moses takes the leaders of the covenant community up the mountain, where “they saw the God of Israel; and there was under his feet as it were a pavement of sapphire stone, like the very heaven for clearness. And he did not lay his hand on the chief men of the people of Israel; they beheld God, and ate and drank” (Exodus 24:10-11). It is significant, therefore, that Jesus arranges for the meal of the renewed covenant to take place in “a large upper room” (Mark 14:15), symbolic of the ascent to Mount Sinai. Like Moses and the elders of Israel, in the “upper room” the disciples “beheld God, and ate and drank.”

In summary, in the Passion narrative we find allusions to biblical covenant structure, which is also the fourfold pattern of historic Christian worship:

• Entrance — the King declares his presence and dominion
• Word — the King enunciates or clarifies his law, the requirements of the covenant
• Table — a meal celebrates the enactment, or renewal, of the covenant
• Dismissal — the King blesses the people (though in the Gospel narrative it is the curse aspect of the sanctions, rather than the blessing aspect, that is in view)

Dr. Richard C. Leonard, a minister of the Conservative Congregational Christian Conference, was Academic Dean of The Institute for worship Studies from 1998-2001. Subsequently he served as Interim Minister of Union Congregational Church, North Aurora, Illinois (2004 05). After having received the Ph.D. in Biblical Studies from Boston University in 1972, Dr. Leonard served as a college professor in Texas and pastor of United Methodist churches in Illinois before transitioning to the C.C.C.C. He was Scripture Editor for The Complete Library of Christian Worship (Hendrickson, 1993), edited by the late Dr. Robert E. Webber, and continued his writing activities after his work with the IWS. He was the “ghost writer” of A Theological Miscellany (Nelson, 2005) and co-compiler of A Glimpse of Heaven (Simon & Schuster, 2007).

Image above, right: “Jesus enters Jerusalem and the Crowds Welcome Him.” Pietro Lorenzetti, 1320.

Postmodernism, Art and the Church
An Abbey on My Mind…