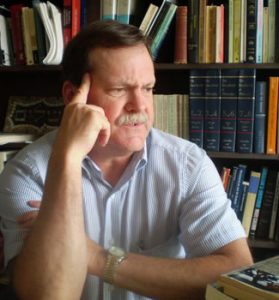 The following is an address that Dr. Williams gave to the June, 2016, conference sponsored by the Robert E. Webber Center for an Ancient-Evangelical Future at the Trinity School of Ministry in Ambridge, Pennsylvania. It is presented here by permission by the author. Dr. D.H. Williams is Professor of Religion in Patristics and Historical Theology at Baylor University, Co-Director of the Center of Ancient Greek Studies at Shandong University, and a Sustaining Member of the Ancient-Future Faith Network.

It is no great observation to say that the Protestant experiment with ancient tradition is still in process. Given the ecclesial diversity within evangelicalism, it is hardly surprising that a predictable hallmark of those communions drawing on the ancient church is its unpredictability.  Reading from the common lectionary, incorporation of certain liturgical elements and the attraction to patristic interpretation of Scripture, using quotes from patristic theologians– these figure most prominently across a broad spectrum of churches, many of which are looking for a centering of Christian faith and practice.

One result of evangelical openness to a broader and deeper historical awareness has been an acknowledgment that the construction of the Christian life must go beyond the re-experiencing or renewal of conversion. Another is that there are ancient “tools” or approaches available in realizing the journey to holiness.  While there is much to gain from patristic spirituality, it will nonetheless have points unfamiliar to us. For instance, at the time in which Christian spiritual practices were becoming generally established in the fourth century, the premier role model for Christian men was not the good husband and father, but the faithful celibate living at home or in the desert as frugally as possible.  Asceticism, not the family, was the best ground for growing in Christ.  Jesus himself set the higher standard in literal form: “Whoever loves father or mother (or a son or a daughter) more than me is not worthy of me.”[1]

For the early church pertinent material for spiritual formation was found in Matthew’s Sermon on the Mount.  In this, Augustine says, “one will discover in it a perfect pattern of the Christian life designed after the highest standards of conduct.”[2] Among the dozens of commentaries and series of homilies on this gospel, the Beatitudes took priority as the treasury to which one should search for the language and precepts of walking gracefully.[3]  We are supposed to “burn with an inward desire of hungering and thirsting after righteousness;” that is, actively “seeking for righteousness, as opposed to some mere longing or fleeting desire of wanting it.” [4] So too, only the pure of heart may see God,” which Gregory of Nyssa couches as “the divine image formed in us through the purity of our lives.”[5]  As a kind of epitome of all the Beatitudes, Matt 5 concludes, “Be perfect (τέλειοι) as your heavenly Father is perfect (Matt 5:48).  Since the term “perfect” in Greek derives from the word for goal (ends, means), human actions are understood in relation to ends; an understanding inherited from Greek thought.[6]  It is what the early church and ancient moral philosophy called the final or highest good (summum bonum).  To strive after the “perfect,” was meant, not only as an ideal, but also as an obtainable goal, as Paul clarified it: “let us cleanse ourselves from every defilement of body and spirit, and make holiness perfect in the fear of God” (II Cor 7:1).

It is instructive to see how Christianity, despite its many theological differences with classical Paganism, shared a certain amount of philosophical infrastructure within Hellenistic rationality.  The rise of intellectuals within Christianity in the second century inform us through their texts that there was already in place a well-developed system of moral formation in the Graeco-Roman world.  Christian apologetic texts often played on a shared expectation of justice and wisdom.  Athenagoras made his argument that victimizing Christians with false accusations does not comport with justice.[7]  Likewise Justin stated directly, “Justice mandates that you inquire into the life both of him who confesses and of him who denies, that by his deeds it may be apparent what kind of man each is.”[8]

Please click here for the entire article in .pdf format.

[3] Besides Augustine, the Beatitudes are treated by Origen, Chromatius of Aquileia, John Chrysostom, Gregory of Nyssa, Hilary of Poitiers; Jerome, Leo of Rome,

Dr. D. H. Williams is the Professor of Patristics and Historical Theology at Baylor University, and the Co-Director of the Center for Ancient Greek Philosophy and Late Antiquity at the Center for Judaic and Inter-Religious Studies at Shandong University. Besides teaching undergraduate and graduate courses, Williams is a Mentor-Scholar with the Green Scholars’ Initiative which is involved with the transcription and translation of Latin manuscripts from the Carolingian era.
View all posts by D. H. Williams →

Second Ancient-Evangelical Future Conference: Nov 30-Dec 1, 2007
How Much is Enough?