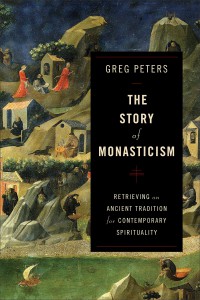 What do pronounced scholarship, Evangelical Theology and historic monasticism share in common? Although significant headway has been made over the last number of years in this regard, the answer to this question is “not much.” Apart from a very few people, myself being one of the few, Evangelical Protestant Theology and monasticism have had little correspondence. With rare exceptions, to be an Evangelical Protestant AND a practicing monastic was almost unheard of.

Thankfully, and in large part due to the work and writings of Rev. Dr. Greg Peters, this has changed — and dramatically. The Story of Monasticism, Peter’s second book for Evangelicals on this topic, clearly, concisely and concretely articulates why Evangelicals should attend to monastic history, priorities, and practices. Beginning with a broad definition and several biblical examples, Peters outlines why Evangelicals must “care.”

Unlike Peters’ first book, Reforming the Monastery, whose intention was to succinctly provide a Protestant apologetic for Evangelical monasticism, The Story of Monasticism provides a detailed history that spans the ages. From the “pre-monastic impulse” through what he calls “Protestant monasticism” and into the 21st century, Dr. Peters takes the reader on a whirlwind tour of monastic history through the ages. All the “greats,” in my opinion, are represented.

Although there are many reasons to commend this particular work, let me cite only a few by way of contrast.

Contrary to many of the histories of monasticism, and there are quite a few, Dr. Peters is sensitive to Evangelicals. As an Evangelical Anglican priest who is a Professor at a conservative Evangelical University, Peters knows his audience and crafts his work accordingly.

Contrary to the New Monasticism, which, while commendable has its problems (as Dr. Peters and I have separately and collaboratively published upon), The Story of Monasticism is unapologetically rooted in history. His work does not try to reshape the history, as much as it seeks to report the history — albeit shaped around Evangelical considerations and concerns.

Contrary to a work of scholarship, such as with Dom Jean LeClercq, Peters’ work is accessible. While certainly a work of a scholar – which is why Father Peter’s writings are to be preferred above my devotional reflections – it is not scholarly, egg-headed, disconnected or irrelevant. Peters’ history is readable and reliable.

Contrary to works that entirely focus on Catholic and Orthodox forms of monasticism, and these ARE important, Peters’ book not only provides a compelling apologetic regarding Greek AND Latin monasticism, but includes the significant Protestant contributions as well. Although some people might now be able to cite examples of Protestant monasticism, Dr. Peters cites example after example — and dating back hundreds of years. Peters’ narrative is enlightening, enlivening, and convincing. He will, I hope, make YOU a convert to monasticism.

With Richard Fosters Celebration of Discipline (and not to overlook A. W. Tozer’s earlier awareness of the broader catholic tradition), Evangelicals began to reconsider and reclaim the classic Christian disciplines of our shared patrimony. Following Fosters’ lead, over the past thirty years other books, journals and papers on Christian Spirituality within Evangelical Protestantism began to emerge. Bible Colleges and Evangelical Seminaries began to develop schools focusing upon Christian Spirituality, formation and direction. With Peters’ two books, Reforming the Monastery and The Story of Monasticism, Evangelical Christians can now continue to broaden and deepen this knowledge-base for transformational purposes. I highly commend Father Greg’s writings.