By Donald Richmond on April 28, 2014 in Uncategorized 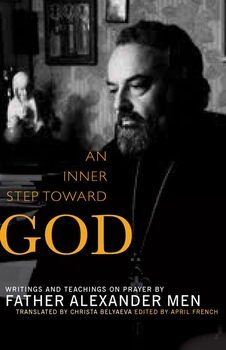 An Inner Step Toward God: Writing and Teachings on Prayer

Father Alexander Men was a priest, martyr, and master of prayer. Lacking time, and under a great deal of pressure, Men provided perceptive insights into both the philosophy (in the best sense of the word) and practices of prayer. Knowing its primacy in Christian formation, Men articulated an accessible appreciation for prayer — apprehended and applied.

Part One, An Inner Step, discusses the personal and parish applications of prayer. The priority is established in Chapter One, and its applications from “sacramental encounter” are discussed in Chapter Two — with emphasis given to the “Lord’s Prayer.”

Part Two, A Practical Guide to Prayer, provides poignantly practical tools for prayer. Included are his thoughts on preparation, place, posture and helpful practices. Spirit, structures and struggles are also discussed, with important attention given to the “Jesus Prayer.”

Part Three, Prayer and Great Lent, is my favorite section in this book. I was most pleased that I received the text during this Season of the Church Year. Beginning with a meditation on the Prayer of Saint Ephrem of Syria, so very central to Orthodoxy, Men then gives guidelines for the “Observance of the Great Lent.” Most useful, in this regard, were Men’s words on the focus for each of these weeks — providing an excellent framework for spiritual focus and formation.

Part Four, Prayer and the Communion of the Saints, centers upon selections from Men’s sermons (or Homilies) on Prayer that capitalize upon certain Saints, Public Prayers and Personal Guidance. As well, in the Appendix (A – D), Men discusses certain exercises, catechetical considerations, and provides a “collection” of prayers referenced in the text itself.

More than a manual on prayer, An Inner Step Toward God provides sound and structured spiritual direction for those who want to convert liturgy into life.

Music Reviews
The Cathedral of Man