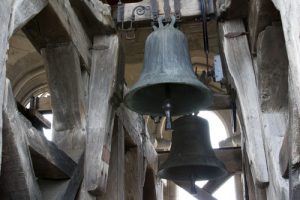 I’ve just returned from a brief business trip overseas that took me to Paris. It is a city that I have grown to love over the past 30 years and that I have visited, often for long periods of time, almost every year during those three decades.  While there, I often have the opportunity to write and reflect.  This year, those reflections were more focused as an old friend at the Sorbonne asked me to meet with his post-graduate seminar group to talk about the state of the American church and its politics in light of the recent election, a subject that has been extensively reported upon by European news outlets.  Thankfully, I had some materials near at hand, so a great deal of preparation was not involved.  As usually happens, however, sometimes the lecturer learns more than the student in the process of teaching.

France, while culturally Roman Catholic, is a secular state.  Churches and, indeed, church institutions receive few special privileges apart from a certain measure of tax exemption.  France is considered to be one of the most irreligious of all countries. According to a survey undertaken in 2010, a full 40% of the French population answered that “they do not believe there is any sort of spirit, God, or life force,” with only 27% stating that they believe there is a God. The other 27% believe that there is “some sort of life force or spirit.”  The remaining 6% “do not know.” On any given weekend less than 5% of the country’s Roman Catholics will attend church. Protestants (mainly Reformed evangelicals) make up less than 2% of the population, just behind the 3% who are adherents of Islam. As an example of the secular nature of French society, getting married in France is a wholly civil function which takes place at a municipal office, while a subsequent religious service (or none) is wholly the decision of the couple and the tenants of their faith community. Since 2013, the same rules apply to same-sex marriage.

It is clearly a different landscape than that of the United States, which most French reporting portrays as “obsessed with religion.”

All this was on my mind as I prepared to meet with the seminar group. Although my French is less fluent than I could desire, the small group of twenty-somethings around the table were patient and understanding. I presented the latest figures from Pew Research on the state of the Church in the U.S., referencing the decline of mainline denominations, the apparent support of evangelicals for the current administration, and a range of other topics. Afterwards, a lively discussion ensued. There were, as always, a number of questions about the availability of teaching positions in the U.S., as there are fewer and fewer posts available in France. I then, sadly, had to inform them of the difficulties being encountered by American universities and seminaries.

As we were preparing to end the session, I took the opportunity to pose my own question to the seminar group. I asked, “What is the greatest challenge you are facing?” Now, after the previous discussion, I was expecting the participants to talk about tuition, teaching posts, etc. After a bit of silence, however, a young man in the group spoke up and said this: 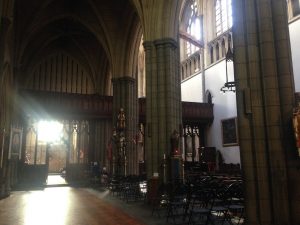 “Dr. Arnold, we are facing the death of historic Christianity in Western Europe. It is clear that this decline has spread to the United States and the Western Hemisphere at large. Like a pandemic, the decline morphs and changes as it spreads and then returns to its place of origin. The evangelicals in the United States are ‘ahistorical,’ dependent not on a reasoned or historic faith but on marketing models largely derived from totalitarian propaganda systems which value only experience. You cannot answer their claims, because the claims have no basis in either history or reason. This kind of evangelicalism is also in Latin America and has spread, returning to Europe in a virulent form. They will only allow the ‘history’ that bolsters not a reasoned or compelling argument, but only a marketing statement. It is the religious equivalent of ‘Make America Great Again.’ The worst part of this is that like all marketing and propaganda, it only lasts for a generation. At the end, we will be left with nothing that speaks of an historic, reasonable Christian faith. We are afraid, Dr. Arnold, that we might be the last generation to know this faith, talking only to each other.”

I carried that young man’s reflection with me through the remainder of my time in Paris and the flight home.

Earlier in the week, a thought had struck me, which I shared with a friend. Through the kindness of a colleague, I had stayed in a condo carved out of a portion of a seventeenth century Musketeer barracks in the midst of three churches and a religious-based hospital with a chapel and a carillon.  In that condo, I constantly heard the bells ringing out from the churches and the hospital chapel.  It struck me that for hundreds of years, people, ordinary people, would have known what the various bells meant– the call to Church, the Angelus, the Words of Institution, the end of church, etc.  Today, however, although the bells still ring, now no one knows what they signify (except for a few antiquarians like me and a limited number of the faithful).  It is sort of like us– we say words to the world around us, but society no longer knows what the words signify.  We know the words (and argue about them) but the world at large has no idea.  We’ve become the bells– sounding lovely and sacred, but devoid of meaning to a society at large which has abandoned faith– as we keep speaking only to each other.

In the course of his academic career, Arnold has been a Senior Research Assistant, Concordia Theological Seminary; Tutor at St. Chad’s College, Durham, UK; Lecturer in Religious Studies, The University of Detroit; Lecturer in Church History, Ashland Theological Seminary; and Cummings Fellow in Liturgy, The University of Durham, UK, in addition to being a Fellow of The College of Preachers at Washington National Cathedral. As a writer, Arnold has authored nine books and numerous articles for scholarly journals. Certain of his works in the study church history have become standard references in their field. His volume, Prayers of the Martyrs (Foreword by Madeline l’Engle) has been translated into nine languages. Although he was first a pastor among evangelicals, Arnold became a priest in the Anglican Communion in 1987. As pastor and priest, he has served churches and educational institutions from the American Midwest to New York City to Northern England.
View all posts by Duane Arnold →

The Relationship of Systematic Theology to Liturgical Theology
60 Seconds with Robert Webber: The Moment I Gave Up the Enlightenment