By Donald Richmond on July 15, 2017 in Miscellaneous

My wife and I have just enjoyed another anniversary. Celebrating this event has also encouraged me to reflect upon the entire sweep of our meeting, dating, engagement, marriage and honeymoon. 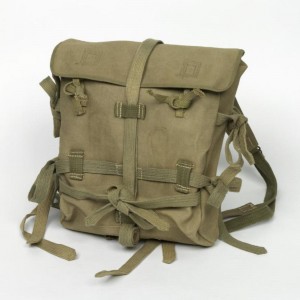 Our honeymoon was spent in Scotland. The preparative process was simple, direct, without any fuss or bother. We threw some clothes in two knapsacks, drove to the airport, boarded the plane, and arrived in England, then in Scotland, nine hours later. Joy!

This is no longer what happens. My wife now packs her bags for a solid week, fills two trunks of luggage that could each serve as a small home for newlyweds, unpacks, repacks, decides upon what she should not take, and finally padlocks her bulging luggage for the journey. Of course, as the dutiful husband who only totes a knapsack, I carry her semi-trailers as well.

I am still of the opinion that we only need a little for our travels. A knapsack over the shoulder will do, unless we are journeying for a month on the Camino De Santiago. But, of course, that would be a rare exception. On most occasions, a little is enough.

And that is precisely the problem with Theology– and our denominational additions. Rarely is a little enough. Instead, preparing for all fear-based contingencies (all of which are not entirely unreasonable), we pack our theological bags to overflowing. Sadly, as many are coming to understand, the knapsacks we have been issued (as well as the knaves that carry them) are unable to sustain the weight.  And, like the wise and worn traveler, some of the baggage we have collected must be properly set aside. We need to, so to speak, lighten the load. I want my church back!

St. Paul, in 1 Corinthians 15, outlines the essentials of the Gospel, and asserts that these are what we really need in order to “stand” and be “saved.” This emphasis is important because I think that we can all agree that Paul was not (like me) a minimalist. He talked a lot. He wrote a lot. He traveled a lot. He was a “jot and tittle” sort of guy. As such, when Paul says “this is what you REALLY need,” we should listen.

What does this great saint of God say we need for our journey? What we need, according to St. Paul, is the Gospel. The Gospel, received and proclaimed, consists of “believing” that Christ died for our sins, was buried, rose again, and was seen by both apostles and people– and all of this “according to the Scriptures.” Simple! This is, broadly speaking, a knapsack faith.

There is a difference between man-made and God-given religion. Paul proclaimed the God-given faith. He received it. It was revealed to him and to the other apostles. After Paul was converted on the Damascus Road he went off and received personal instruction from the Lord himself. St. Paul makes this claim. Later, to ensure that his faith was in keeping with the apostolic witness, he submitted his “good news” to the gathered apostles. They affirmed the revelation that he received. The Christian faith is a revealed faith, it is God-given. We must, therefore, think about shedding some of our man-made interpretations and, instead, carefully attend to the packing of revelation and essentials. Otherwise, like the unskilled pilgrim, we will need to shed those things that do not help us attain the goal we were assigned and seek.

To speak with a human tongue, of man-made religion, is inevitably babel– a compromise of theological intention, tone, and tongue. Paul, even as we read his many letters, did not waste his time with non-essentials. Most of his letters were brief, to the point, with a clearly articulated intention. While at times he did talk and write a lot, he sought to be free of baggage. We need, as with the Desert Mothers and Fathers, such brevity. We need, as with them, to learn the wisdom of “a word,” not an ongoing lecture that is almost always spoken in the tongue of Footnote, Addendum, and Appendix. As an example, I have heard of pastors lecturing for seven to ten solid years, excepting holidays, on one book from the New Testament. What a gross breach of theological intention! What a repugnant expression of self-aggrandizement, not scriptural analysis! At least half of the New Testament consists of LETTERS, not meandering missives. Read out loud, Jesus only spent fifteen minutes preaching the Sermon on the Mount. Peter’s first sermon took far less. Stephen, in his defense, took a bit more time– but not much more. Granted, the author of Hebrews took about forty-five minutes, but, if my more Reformed friends will restrict themselves to a half-hour to forty-five minutes exposition (without the fluff and tedium of endless stories and witless humor) I am willing to give them a pass. But instead of theological brevity we insist upon tedious baggage. We rarely capitalize upon the bullion at the bottom of the bag because we spend so much time sorting through the baggage.

Do not misunderstand what I am trying to say. Educating people in The Faith, in Christ our Lord, is vital. We do need sound catechesis. And, if I am entirely honest, some of our additions or accretions might (at times) serve as useful summaries. The Apostles’ Creed is, I believe, a good summary of biblical revelation. However, the voice with which we must articulate our proclamation is “according to Scriptures.” (Think for a moment about how many “add-ons” we have attached onto essential faith.)

At this point I am quite sure that many will argue that her or his pet doctrine is “according to Scripture.” Who, as an example, could argue with Dispensational Theology? Who could argue with strict Calvinism? Who could argue with the biblical foundations of either amorphous Anglicanism or paternalistic Catholicism? Who could dare suggest that the Council of the Hundred Chapters is not entirely biblical? (Who, in the West, has even heard of it!) Who cannot see the biblical wisdom of cassock above academic gown? Who cannot see that Rome is better than England who, in fact, is better than Geneva? Who would DARE suggest that Presbyterianism is not TRULY Reformed according to the biblical mandate? You get my tongue-in-cheek point. Proclamation and education must be basic, understated, and applied to the unique context of each individual, family, tribe, community, and nation. If the REAL basics are present, what should we care about other items and issues? All else, improperly embraced and articulated, is condemned as “I am of Paul,” “I am of Apollos,” “I am of Jesus.” In short, we all too often carry fine Corinthian luggage– always trendy in any age or region.

This does not mean that, apart from the basics, the essentials, anything goes. Far from it! A saving stance must be embraced (faith) and embodied (practice). Faith and practice go hand in hand. Belief will always, without exception, have behaviors associated with and attached to it. As well, not to be overlooked or minimized, basics must not be neglected.

To some degree, as well, a certain amount of latitude must be allowed. Paul tells us, in our text from 1 Corinthians, that the faith he proclaimed is rooted in history. Salvation stands, as must we, in real place in real time among real people with real needs that require real answers. Christ’s human history as the God-Man, like the history of the Church, exists within (but is not entirely bound by) space and time. As such, as this good news of Jesus Christ expanded from Jerusalem and Judea to Samaria and the uttermost parts of the earth, it took on certain real time and place historic qualities. Consequently “Parthians and Medes and Elamities and residents of Mesopotamia…Cappadocia, Pontus and Asia, Phrygia and Pamphylia, Egypt and parts of Libya…Rome…Cretans and Arabians” (Acts 2:9–11) all heard the same Gospel, embraced it, and yet returned to their countries and cultures communicating Christ’s essential message in and through the unique “tongue” of their tribal and national identity. Certain things were fixed (the substance of the message) while other things were flexible (the structures by which the substance was communicated). It is not surprising, therefore, that while the substance of Apostolic Teaching, Breaking Bread, Community, and Prayer (Acts 2:42) remain fixed; the structuring of these things, such as found in unique liturgical expressions, will be somewhat flexible.

My wife and I have just, somewhat recently, returned from our annual holiday. As usual, we have collected a great many things that we really did not and do not need. Most of the books and baubles I have purchased are now in my “give-away” pile, or are already passed on to friends who will be benefited by them. I have, incidentally, just in case you were wondering, kept my wife. She is the “essential.” I really do not need much more. I have no urge to consult our Marriage License and Episcopal Order of Service to determine whether she has the right to pack what she wants for the journey, or whether I have a responsibility to carry all of the stuff she thinks she needs. I have crafted my life and my heart around her. She is the substance, all else is structure. I stand by and with her in this, recognizing her right to pack as much crap into her bags as she wishes. Likely I will carry her luggage, as I have over these years, but do not insist upon others doing so. And I would, as well, flatly resist anyone telling me that I must pack every item my wife packs, A through Z.

Such should be our stance on essentials. Less is good. Little is my litany.