By Donald Richmond on August 19, 2013 in Miscellaneous 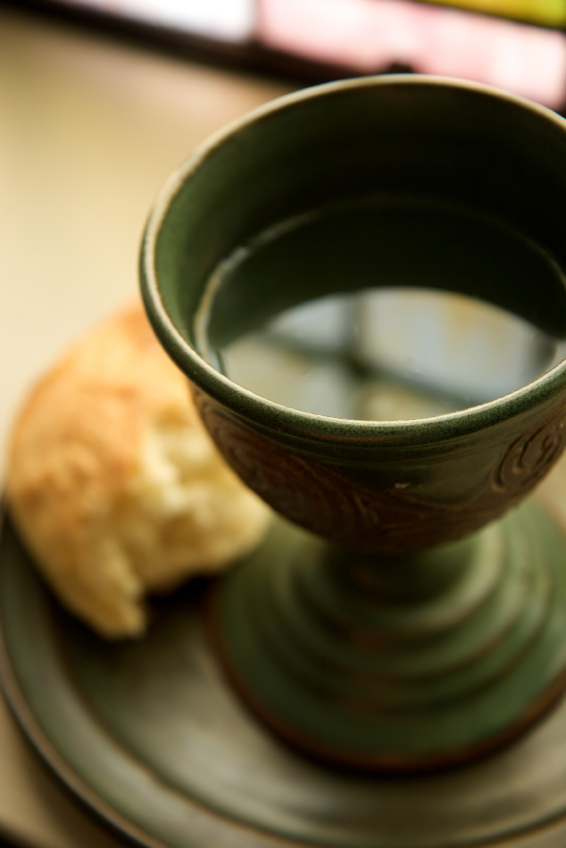 We prepare our heartswaiting
for the word
well spoken

As processing up
through ages
we reach the Altarbowing.

This is the Liturgy
of Word
collected and communicated.
It is what
we say
after God.

And it is nowhere
as a hinge
we turn and speak
“The Lord be with Thee”
as creed
after Creed.

As processed
through the grinding
mills of our mouthingshungering.

This is the true
Work of God:
Man made bread
and back again
as Body
and the Blood

We prepare our worldweeping
from our five wounds
bled before us

As processed
through Gethsemane
and our Golgotha’ssweating.

This too is the true
Work of God:
The grinding of our bones
as Bread
with His Wine

And it is now,Now
at this place
of time, speaking
“Do this.”

Continue Reading 0
By Connie C. Bull on July 31, 2012 in Uncategorized

Henri Nouwen reminds us that “person” in English is fashioned from the Latin words “per” and “sonare”— literally,  a person is a “sounding through.”  Children are persons, though not always in history were they acknowledged so.  According to Deut. 29:10-12, God required children to be present to establish His covenant: (10)All of you are standing today in the presence of the LORD your God—your leaders and chief men, your elders and officials, and all the other men of Israel, (11)together with your children and your wives, and the foreigners living in your camps…(12) You are standing here in order to enter a covenant with the LORD your God…

Worship in Spirit and in truth is about God sounding through all who worship, regardless of age.  If we are to cease the worship war and calm the roar of the lions amid our lambs, Isaiah 11:5-7 assures us that  “a little child shall lead them.”

How can children lead in the worship elements of the Gathering of God’s people to worship?  Let us count the ways! END_OF_DOCUMENT_TOKEN_TO_BE_REPLACED

Continue Reading 0
By Jim Robertson on April 3, 2012 in Miscellaneous 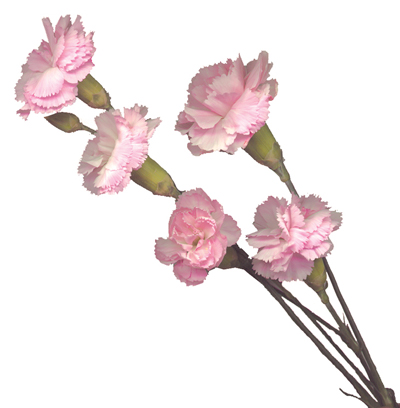 In May of 2011, I was privileged to curate worship on the opening night of the Vital Church Planting Conference in Edmonton, Alberta. This is an annual event, co-sponsored by the Anglican Diocese of Edmonton and Wycliffe College’s Institute of Evangelism. The gathering ritual crafted for this event is also well suited for Thanksgiving, as it involves receiving in gratitude, sharing with others, giving back to God, and receiving from God anew to give yet again. It is a welcoming / gathering / offering / sending ritual, all worked through variations on a single motif… the giving and receiving of a flower.

Carnations are an ideal flower for this ritual as they are long stemmed, sturdy, inexpensive, and available in variety of colours. Other flowers could be used, but they must be able to withstand being handled several times. You will need one carnation per expected attendee, and a vase for every twenty-five or so flowers. Personnel requirements include a worship celebrant, music team, one ritual attendant per vase and at least one liturgical dancer.

Gift is at the core of the ritual, and forms the welcoming to the gathering. Prior to the service, have the ritual attendants at the building entrances, each with a vase. As persons enter, each is presented a flower, and greeted with these words: With the gifts I have received from God, I welcome you to this gathering. Encourage the attendants to use the scripted wording, as this prepares the congregation for the gathering of the community, and the concept of “gift” that is carried through the ritual.

As the congregation is nearing the end of the exchanges, the music team can start playing a gathering song instrumentally. (For the Vital Church Planting Conference, the song used was Paul Baloche’s “Because of Your Love.”) As people have been moving around and mixing, it may take a minute to get back to their seats. 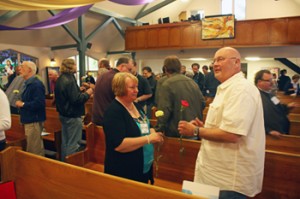 When the congregation is mostly back to their spots, lyrics can start, and the service flows into the offering. At this time, the ritual attendants start at the back of the church, gathering the flowers into the vases, working their way to the front. When all the flowers are gathered, the attendants, one at a time, from the foot of the altar area, present the vases to the dancer, who ‘dances’ the vases  individually to the altar and places them on it, while the song continues to be sung congregationally. The gifts each person has received from God in being welcomed are offered back to God.

From here, the service can flow into a music set, sermon and Eucharist, but do be creative as to how these elements can be tailored to suit the context the ritual has provided and to which it will return.

The Sending Out in Mission & Benediction

As a sending song is being played, the liturgical dancer “dances” each vase to the foot of the “stage” and hands it to an attendant. When all attendants have their vases, they then distribute the flowers to congregation, while the congregation continues singing the sending song. As the congregation now has embodied being gifted by God and as they are about to go out into the world, the Benediction will hopefully interweave a variation of the gathering words… something such as: With these gifts you have received from God, go, and welcome others into his Kingdom. With those words, the service closes, and the congregation take their flowers into the world as symbols of the gifts of God they carry for others.

If your congregation wishes to use this ritual, I will happily assist by answering pre-production questions, and discussing variations. Also, I would appreciate hearing how your team and congregation engaged with and reacted to it. I can be contacted at interfaceworship[at]gmail.com for written comments or to arrange a telephone time.

Regarding materials cost, if your church already purchases fresh floral arrangements for the altar each week, consider using the offering bouquets as the altar flowers to overcome fiscal resistance.

I think the ritual would also work well for Pentecost. In fact, the genesis and first prototype of this ritual was used at a service I created called “Ascentecost”, which is staged between Ascension and Pentecost. This liturgy views two events as the ‘”bookends” of a singular event, being the birth of the church. I think the ritual well symbolises the church being drawn into the perichoritic dance, and reflects both (i) Cappadocian concepts of Trinity (the abundant surplus of love between/within the Trinity creating space for others do dwell in), and (ii) John van Ruusbroec’s (14th century Flemish mystic) descriptions of Trinitarian relationships (Father & Son flowing outwards in individuation, Father & Son flowing inwards in the beauty and simplicity of singularity. the tension between the two being maintained by a love so perfect it can only be love personified, the Holy Spirit).

Jim Robertson is a lay liturgist and a worship innovator. A restless innovator, Jim has crafted many rituals and liturgical components to be used within alternative worship events. Jim’s major events have become known as lavish celebrations of art and devotion, often featuring multiple artists creating prophetic works, hundreds of feet of fabric, blends of ancient and modern devotional practices, multiple prayer stations, unique Eucharistic rituals that portray the event theme, and a serious probing of deeper theological concepts through the experience of worship. Amazingly, Jim maintains a day job as a criminal lawyer. He lives in Edmonton, Alberta, Canada, with his wife Darlene, and has four grown children.