By Donald Richmond on September 19, 2013 in Uncategorized 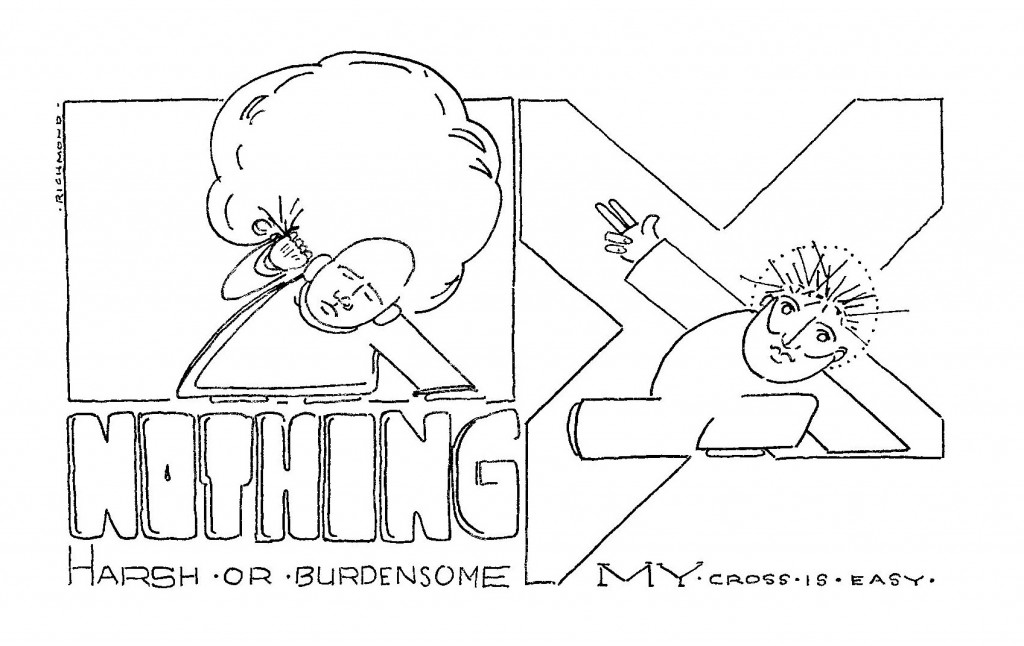 “There is only one sadness, not to be a saint.” -Quoted in The Very Rich Hours of Jacques Maritain

There is a very interesting and instructive progression documented in the Rule of Benedict (RB). The final admonition in Chapter 4: 72, “never lose hope in God’s mercy,” feeds quite nicely into the final words of the RB in Chapter 73 — some 69 Chapters later. In this last Chapter, which in practice is a beginning, Benedict says that these words were written so that those who hear and heed his words will come to “loftier heights of doctrine and virtue” (emphasis mine). That is, Benedict has written his Rule as precepts of perfection.

But Benedict is also a realist. He recognizes that between the intention and the reality “falls the shadow” (T. S. Eliot). Every one of us has experienced the “shadow” falling between what we intend and what we actually accomplish. Although we have often “wept and fasted” and “wept and prayed” (T.S. Eliot), we have often found ourselves mired in failure and frustration. On some very painful level we know that “there is only one sadness, not to be a saint.”

The reminder that Benedict issues in Chapter 4: 72, “never lose hope in God’s mercy,” is therefore quite encouraging. While Christians should be concerned about and invested in holiness of life, loftier virtue, we must remember that it is only an appreciation of God’s great mercy that encourages the pursuit of Christian perfection. As the Psalmist has written, “But there is forgiveness with Thee / That Thou may be feared.” God’s forgiveness leads to celebratory fear!

When I read and reflect upon the RB I am both refreshed and rebuked. My ongoing reflections highlight how very much I need to learn and apply. And yet, as well, the RB also teaches me that growth in grace, community and God is a process. What God and Benedict want is not “rigorous or burdensome” (RB, “Prologue”), but a “school of the Lord’s service” that is intended as an “unspeakable sweetness of his love” (RB, “Prologue”).

May we all come to know such love so that the disciplines of our schooling may result in greater perfection. 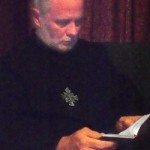 Continue Reading 0
By Donald Richmond on August 2, 2013 in Uncategorized 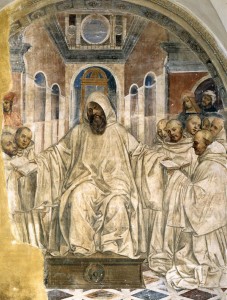 Donald Richmond: The Baptismal Covenant of the Episcopal Church asks this question of the people: “Will you continue in the Apostles’ teaching and fellowship, in the breaking of bread and in the prayers” (p.304, 1979 BCP). Taken directly from Acts 2:42, this is a question that imposes itself upon every committed Christian. Will we continue?

When I was a younger Christian I remember being challenged by a very similar question. To this day I recall my ardent and insistent response: “Yes, Lord, you know I will continue.” Now, almost forty years later, I think my response only echoes St. Peter’s “Lord, I am willing to die for you.” We know the unfortunate outcome of this adamant assertion! Continuing is not always easy.

The Rule of Benedict (RB) emphasizes a similar concern for “continuing.” Benedictines call it “stability.” In Chapter One of the RB, St. Benedict lists the types of monks (hear, in our context, “Christians”). One set of monks / Christians that are rebuked and rejected are those who move from place to place without any stability — and, as such, authority. These, according to Benedict, are BAD monks — if, truly, monks at all.

A solid monk or Christian is a person who can stay put, who has learned to embrace stability. He or she does not go from place to place seeking out the latest and the greatest “Christian” trend or experience. Good Christians, to borrow from T.S. Eliot’s “Four Quartets,” have learned to sit still “even among these rocks [of our experiences and disappointments]” and find “peace in His will.”

But, as we all know too well, this is at times very hard to do. Let me take aim at one American expression of instability: Church shopping and hopping. How often do we see American Christians moving from church to church because the pastor or parish does not meet his or her “needs?” Frequently this has very little to do with a move from one geographic location to another. Rather, and sadly, it often has to do with our incessant search for the experimental (Let’s worship in this new and fancy way!) and experiential (Let’s go to Church for the “feel good” narcotic we so desperately need!). And, of course, we always have an excuse for our miserable theology — often rooted (in our mind) in the lack of the pastor, parish or “denomination.”

To be sure, there are at times legitimate reasons for leaving a church. If the church does not abide in Apostolic teaching, as an example, we should leave. If the church breaks the bonds of Apostolic fellowship, as another example, we have good cause to move on. However, more often than not, we are simply unstable and this personal experience of being unstable is expressed publically through church shopping and hopping. Neither St. Benedict nor God are pleased with such an orientation.

The kinds of monks who are unstable are called a gyrovagues in the RB. Note the two parts of this word. A “gyro” spins about going from place to place without any real direction. “Vagues,” on the other hand (and as an extension of the first part of the word), has no purpose. He or she is vague and, as such, a vagrant. Consequently gyrovagues have no direction or purpose and are spiritual vagrants. To grow in God we need a fixed stability that is rooted in God AND IN A LOCAL CHURCH WHERE WE SET DOWN DEEP ROOTS!!!!!!

We need to re-evaluate our Church-shopping and hopping mentality. We need to rethink our doctrine of the Church and how it applies to our daily lives. God, St. Benedict, the local assembly and the Church Catholic (not Catholic Church) expect stability. Will we continue in EVERYTHING expected in Acts 2: 42 — stable fellowship being central?

Continue Reading 0
By Donald Richmond on February 18, 2012 in Uncategorized 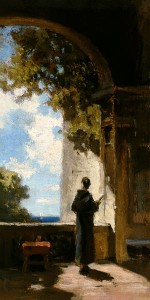 Donald Richmond: We all live by a rule, a “creed,” by which we live our lives. Sometimes this rule is known. At other times it may be unknown and exist as an unconscious influence in and over our lives. Upon occasion, most especially if we seek to consciously conduct our lives under the direction of Scripture, Spirit, and the saints (= community of the Church which is one, holy, catholic, and apostolic), we are afforded opportunities to become aware of our rules, evaluate them, submit them to God, and change them.

I clearly remember the rule by which I lived my life for many years: “I’LL SHOW YOU!” The capitalization of this statement, this rule, illustrates the militant emphasis I placed upon this priority. And although an evaluation of my life-circumstances clearly reveals the etiology of this emphasis, this rule was destructive on many levels. The point, however, is that we all conduct our lives by a rule– and it will have either constructive or destructive impact.

When Emperor Constantine issued the Edict of Milan in 313 AD, it brought an end to the religious persecution of Christians within the Roman Empire. In many ways this was a very positive advancement. In other ways, however, Constantine’s efforts did not yield favorable results. His edict of toleration became an affirmation of favor. Soon, the Church became popular. Being a “Christian” was seen as trendy and used as a means of social acceptability and advancement. Consequently, with time, the “world” began to infect the “Church.”

At this time, between the fourth and fifth centuries, men and women in the Middle East began to flee to the desert in order to seek God. They saw society, and the compromises of the Church, as a “sinking ship” from which they needed to flee. But they were not escapists. If at any time these men and women thought that they would escape community they were mistaken. Thousands of people moved into the desert where, together (and sometimes alone), they sought God: His word, will, works, and ways. This is the foundation and fountainhead of Christian monasticism. Those who follow a monastic way of life, or are associated with it, are called monks, associates, or oblates.

One of the many monastic orders that developed over the past sixteen hundred years is the Order of Saint Benedict (OSB). Of crucial importance to the OSB, and to almost every other monastic order within the Western Tradition, is The Rule of Saint Benedict. It is a classic of Christian spirituality that has simultaneously guided the OSB and shaped civilizations. Culture, education, and prayer have all been influenced by Benedictine spirituality[1].

Benedict wrote his “Rule for beginners” as a “school of the Lord’s service.” Critical to its exercise is learning to listen, most especially listening to God through God’s revealed word. In fact, the very first word in The Rule of Saint Benedict is “listen.” This emphasis, the emphasis that dominates the entire Benedictine enterprise, is empowered by learning to “turn” (and tune) “the ear of our heart”, accepting “advice,” and practicing God’s word through the “labor of obedience.” St. Benedict, following the Old Testament Wisdom Literature and St. Paul, provides us a Rule by which we can be “transformed by the renewing of [our] minds.”

We all live by a rule. We will either consciously embrace a rule of life or we will unconsciously be “conformed to this world.” The Rule of Saint Benedict can and has encouraged a worldview and lifestyle punctuated by listening and obedience. It has impacted the civilizations. It can also help provide direction for our own lives.

Image above: “Breviary Reading Monk in the Cloister”: Carl Spitzweg