By Donald Richmond on February 3, 2012 in Miscellaneous 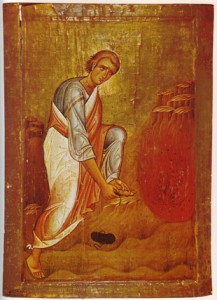 The revival of worship arts over the past number of years begs a question that, for many Evangelicals, has yet to be adequately asked, addressed, or answered. What is the place of image in worship arts? A casual evaluation, given some very broad limitations, would suggest that many churches have adopted an “anything goes” approach that is both biblically and theologically uninformed. At best many of our churches, if not uninformed, are decidedly ill-informed. If our use of images broadly affirms what the church teaches and does not offend the (often) uneducated tastes of the faithful, then whether we use “kitsch,” Rothko, Fujimura, Bowden, or some of the more “classic” Christian artists of antiquity, is of little concern.

This is unfortunate on many levels, one of which is that such an approach often produces an outcome that, while (possibly) “edifying,” entirely undermines the purpose and power of worship as catechesis (education). Like it or not, understand it or not, images educate. Images communicate a message that will either empower or emasculate the good news of Jesus Christ. And let us not be fooled, the same principle applies to every visual or verbal art.

Given this, what can we do to ensure that there is a dynamic correspondence between the message we preach and the methods we use? Referencing the long history of Christian iconography, several guidelines become apparent.

Christian visual arts in worship must correspond with what the Bible teaches. For Evangelicals this first point will appear to be understood. In practice, however, it isn’t. Given the great intersection between the spoken, sung, written, and visual “words,” the visual must have the same biblical integrity as do the other components. Taking a point from the historic icon of Moses and the Burning Bush, should Moses have a beard or not? No doubt such a concern will evoke consternation, confusion, or cacophonous laughter among those of us who embrace a hearty Evangelical faith. “What difference does it make,” many will mock. “Isn’t this majoring on minors,” others will assert. What is needed, however, is conversation. The reason we do not understand the issue about Moses’ beard is because our biblical and theological knowledge is deficient. There are many biblical “beards” we must address if there is going to be a dynamic correspondence between message and method in our worship. The pastor and worship leader must be leaders in this arena, as in so many others.

Christian visual arts in worship must also correspond with what the Church historically teaches. That is, worship arts must be understood and approached as a distinct theological enterprise. The Church has historically taught that images in worship are “theology in color.” Just as the pastor must engage in the exegetical task of understanding and communicating the written text, so also the visual text must be exegetically approached. In fact, the correspondence between both the verbal and the visual is so very close that the images we use must, like an icon, be seen as “written” texts of theological purpose. Again referencing Moses’ beard, or lack thereof, what does the Bible teach and what are the theological foundations either supporting or negating either its presence or absence in visual arts? As such, even if our use of images is tasteful it does not guarantee a correspondence with Church Tradition. This Tradition must be addressed and practically embraced if message and method are going to speak together.

Christian visual arts, most especially in our (often) non-liturgical Evangelical churches, must be rooted in both a theology of repentance and informed resourcement of the past. The Protestant Reformation(s), while seeking to reform the Church, also deformed it. One of the ways the churches of the Reformation were deformed was through iconoclasm, the destruction or diminishment of images. The German, English, and reforms ofGeneva each engaged in a destruction of images (with some exceptions) that, in spite of recent changes, we continue to experience and endure. As such our return to the use of images, while in some ways commendable, is frequently both reactionary and uninformed. A cautionary note is urgently needed. The iconoclastic history of the Protestant Reformations created a socio-psycho-pneumatic vacuum that has become our heritage. We hunger and thirst for images for many reasons, one of which is the unwise and indiscriminate disregard of their importance. If we are not careful and prayerful we are in danger of advocating an unwise and indiscriminate return to their use.  If we are going to effectively engage in the use of the images in worship, we must revisit and repent of certain elements of our history that has become our heritage.

Christian visual arts in worship must ensure that all of the genres used in Christian worship – whether through reading (which is, indeed, an art) preaching, singing, drama, film, or any other forms of visual arts – work consistently, comprehensively, and cohesively. Upon entering an Orthodox church, people are often impressed (or shocked) by the images that dominates the architecture. (In fact, even the architecture itself is a theological treatise, and we Evangelicals must give far more attention to how we build our houses of worship.) Icons are on the ceiling, on the walls, and on the icon screen (iconostasis). The uninformed may initially think that such an arrangement (although beautiful) is a confusing clutter of seemingly unrelated images. But this is not the case. Every icon, adhering to a received tradition, is placed in a very specific order to communicate a particular message. The icons are “written” and arranged so as to speak with a harmonious voice. Each and every icon is consistent with tradition, comprehensive in its vision(s), and cohesive in its artistic integrity and approach. Applying this to the auditory arts, not to have such an approach is like having a musical conductor with two broken arms or like two orchestras simultaneously playing different compositions.

Finally, and, quite oddly given what has been already stated, visual arts in worship must also correspond with the cultural settings in which we live. This makes good sense considering that one of the key components of the Reformations was that worship (including the reading of the Bible) would be in the language of the people. This does not mean, however, that worship must in any way become cultural accommodation. Quite to the contrary, worship is counter-cultural in almost every way. 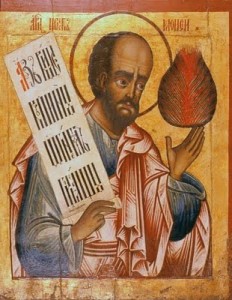 What it does mean is that each culture, while maintaining certain biblical and theological norms, will have approaches to worship that differ from our own. Continuing our ongoing emphasis upon icons, Byzantine, Coptic, Spanish, American, and Hispano-Pueblo icons differ significantly from each other. Similarly, even within one culture or country (such asRussia) there are a variety of schools that reflect certain iconographic perspectives that differ from one another. Nevertheless, and this is important, every true icon will comply with iconographic “language” that upholds the biblical narrative and both its theological and catechetical enterprises. Like the “I” and “We” of the Creeds, we must speak separately but the same.

To beard or not to beard, that is the question. But, quite frankly, I am not sure that the iconographic tradition definitively answers the question of Moses’ beard or lack thereof. Although the oldest traditions show Moses beardless, I have seen others that have him fully bearded — and yet the “writer” seeks to adhere to orthodoxy in image. Nevertheless, as with all points of worship, even every apparently “small” part must be biblically, theologically, traditionally, culturally, and counter-culturally attended to.

The Very Rev. Dr. Donald P. Richmond, is an examining chaplain with the Reformed Episcopal Church – Anglican Church in North America, and a widely published author.